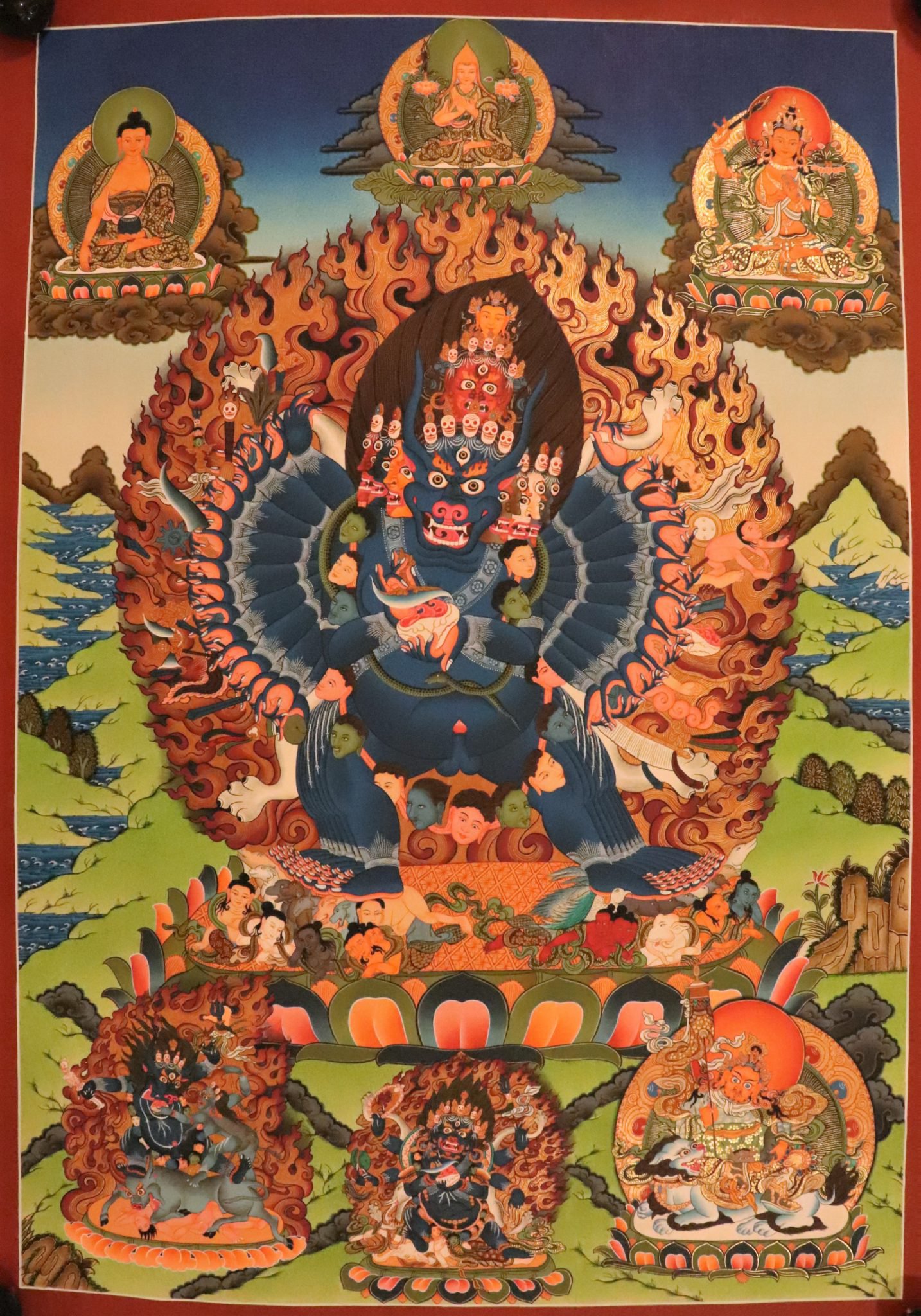 Yamantaka is a wrathful worrier, in the center of a thangka surrounded by Manjushri, Guru, Shakyamuni Buddha, Mahakalas and jambhala.

Yamantaka is a wrathful worrier, in the center of a thangka surrounded by Manjushri, Guru, Shakyamuni Buddha, Mahakalas and jambhala.

Yamantaka is also called Vajrabhairava, is one of the eight Dharmapalas, or Dharma Protectors, who are sworn to defend the Buddha’s teachings for all time.

He is a buffalo-headed meditational deity of manifestation of the Bodhisattva Manjushri, a deity of Highest Yoga Tantra. and a dharma protector.

Vajrabhairava is one of the principal three meditational deities of the Gelug school. He is also one of the main yidams in the Sakya school where he comes in a variety of appearances.

In both schools, Vajrabhairava is seen as the wrathful manifestation of Manjushri, the Buddha of wisdom.

It is said that in the form of Yamantaka, Manjushri defeated the demon king Yama, the Lord of Death.

Yamantaka symbolizes the victory of wisdom over death through the direct realization of the ultimate nature of reality.

Yamantaka is portrayed in many forms; this form is called Yamataka Ekavira, meaning “solitary hero”. He is depicted with 34 arms, 16 legs, and a bull’s or buffalo’s head with long horns as the central head among many. In total there are eight main heads, plus a ninth small crowned head of the Bodhisattva Manjushri at the apex.

Yamantaka wears an elephant-skin cloak, a garland of freshly cut human heads, a garland of snakes, and bracelets, necklaces and a girdle made of interlaced bone ornaments.

He is unclothed except for his adornments. His erect phallus has a red tip, and there is a flame aureole behind him. His central main hands hold a chopping knife (kartika), representing his ability to cut the root of delusion, and a human skull bowl (kapala) filled with blood, symbolizing his victory over the forces of death.

In the other schools of Tibetan, Buddhism Yamantaka seems to be most revered as a protector. The practices there involve different activities for various purposes.

There are also some Yamantaka terma revelations in the Nyingma and Kagyu schools. From amongst the many lineages of practice to enter Tibet the main transmissions of Vajrabhairava were those of the two translators Ra Lotsawa and Mal Lotsawa.

Although practiced early on in Tibet by the Sakya and Kagyu Traditions, it was Tsongkapa, founder of the Gelug Tradition, who instituted Vajrabhairava as the principal Gelugpa meditation practice.

For custom size, design and bulk order please contact us.